Lincoln Forums Navigation:
Menu
Log in
Register
Navigation
Install the app
More options
Contact us
Close Menu
You are using an out of date browser. It may not display this or other websites correctly.
You should upgrade or use an alternative browser.

claudiel19 said:
I thought I'd start this thread to give everyone (myself included) an opportunity to share pics of their beloved rides. 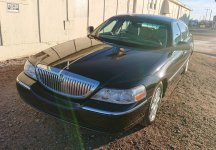 Ooooh! I love this! Looked through everyone's sexy rides, brought smiles to my face. Here are mine: 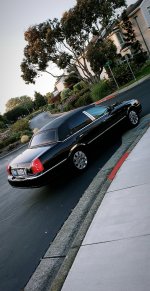 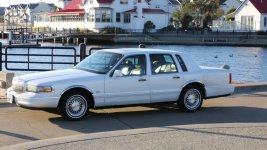 If I didn't need something newer like my 2011 for work, I'd sure love to have a square one, best looking towncar they made I think. Ideally I'd do a Mark IV again, but 8 mpg and 1400 vacuum lines isn't a recipe for reliability or long drives trying to sell my wares.

andrewjneis said:
Ooooh! I love this! Looked through everyone's sexy rides, brought smiles to my face. Here are mine:

Beautiful! Great automobiles for sure!

New Owner, Found this group, here are a few pics of my new to me Town Car. When I saw it, the shop owner made me an price offer I couldn't say no to, not for it to go to someone else who wouldn't appreciate it like me (he knows me too well) In the same related family group of owners until I bought it. Last owner said, "I probably shouldn't have sold it.", after I tracked him down.
First three pictures as found, needed brake lines front to back, new rotors & pads, front and back, new calipers, front only, new battery, tires dated April of 2018, new intake manifold (corrected version), new plugs, new air filter, new fuel filter, along with fresh antifreeze and oil & filter change. No rust, except for light surface rust in some places underneath. Frame rails still black inside. All work above had been done by mechanic that also services our cars and camper van. He had been trying to sell it, but no one wanted a boat, or "large barge" as he called it. He bought it when original owner decided that was too much work ($$$) to put into an old car like that. I paid $2K for it, with all the above work already done. (I think he just wanted it gone.) He and I will put the blend door actuator motor in some weekend together, as entire dash has to come partially out. (stuck on full heat right now) Mechanic has done one on his mom's Town Car, will do mine for free, if I buy the blend door actuator motor, and help with the work. What a steal, what a deal!
Next six pics are at the new home, only thing done by me so far is run it through the car wash. Cannot believe the gloss still on the paint. Former owner said it was always kept in a garage, no matter which family member owned it. Seats will need some leather love treatment this next spring when it is warmer. Rust proofing is also on the list of things to do.
Oh yes, rent the elderly neighbor's garage for the wife's car (under cover), had plenty of room for the Town Car on the other side! Still have to get the battery maintainer installed on the TC, wife's car got one when she bought it. Her summer car, while she drives my car (same kind, lesser model), in the winter yuck stuff. I drive the older still, rusty hand me down, which is leaving piece by piece as it rusts away. The reason I had to have a better car, I tell the wife!
Love my new Town Car!!!
96 Signature

A Classic for sure. Looks very cool!

It was in too good of shape to just see it go to somebody as "a beater". It deserved a better life than that, after having survived this long. It will be a fun spring, summer, fall, car. I see many car shows to attend in its future. I usually try to do a story board display at a show, with the car and owner history; try to get previous owners to contribute a few pictures of the car if they still have any.
Already have the dealer brochures for 1996 Town Car, looking for other Lincoln items yet. Of course, a car is fun to look at, but offer them a chance to sit in that leather seating, and actually "feel" the car really lights them up. Guy with a 'Vette at one show said to my daughter, "come back at the end and you can drive it." She did, was thrilled to death, and still talks about it 25 years later. Met his daughter the next spring, she was at a show with his 'Vette, he had passed away a few months after the show that he let my daughter drive his 'Vette at, and talked of how much fun he had, letting someone else appreciate his car, too. That hopefully will be what the Town Car will be for me, a way to share and connect to others, great automotive history. 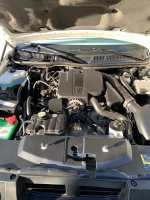 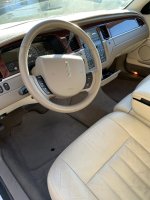 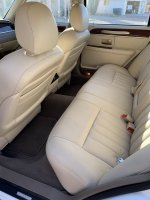 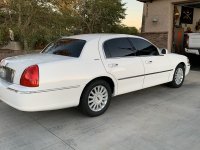 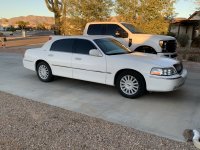 Beautiful! I have the same Town Car. Just a different color. Do you have the dreaded water leaking issue like most of these Town Cars? Wish I could find someone that has a permanent fix for this issue. I just found my carpet on the right rear passenger side damp. Front is fine. Very confounding.
______________________________

JohnnyH1012 said:
My 2007 Designer Series that I just purchased. Look forward to exploring the forums!
View attachment 5531
Click to expand...

here's a shot of mine before i adjusted the rear height sensor.
2006 Sig w/117 when purchased in late August...sportin almost 122 now and has had its share of issues which i posted about last week.

Babyburr said:
Beautiful! I have the same Town Car. Just a different color. Do you have the dreaded water leaking issue like most of these Town Cars? Wish I could find someone that has a permanent fix for this issue. I just found my carpet on the right rear passenger side damp. Front is fine. Very confounding.
Click to expand...

Your water is coming in from either the sunroof drains if you have a sunroof or the firewall area where the hood release goes thru or, and this is the most common, the drain at the bottom of the windshield under the plastic. It will take the carpet back there forever to dry unless you pull it up and let it dry out. Although I live in the northeast so it’s not warm now. Lol every Lincoln Town car I’ve ever had that had a water leak, it was from one of those three places.Oh and FYI there are a few videos on YouTube regarding a fix that lasts.
______________________________

Well, I’ve taken the fresh air intake section out and I’m making a new gasket. What I want to know and I’ve asked several places and have not gotten a good answer. There is this sponge like item resting in the corner on top of a fender bolt. What in the heck is it for?

Babyburr said:
Well, I’ve taken the fresh air intake section out and I’m making a new gasket. What I want to know and I’ve asked several places and have not gotten a good answer. There is this sponge like item resting in the corner on top of a fender bolt. What in the heck is it for?
Click to expand...

I’ve never known for sure but maybe it’s a buffer of some kind for squeaks that may or may not occur. My first inclination when I saw it was something to do with water absorption but

It looks more like an oil holding device. I guess I’ll put it back

Babyburr said:
It looks more like an oil holding device. I guess I’ll put it back
Click to expand...