What else is in your garage?

This picture was on my other thread in the MKT forum. 2006 Dodge Ram, which I'm selling. It is rusting away, but otherwise runs and drives great.

I own two S series Saturns. The black one on the left (1999) is the only car I ever bought new. My older son and I rebuilt it before he turned 16 and he drives it now. It is approaching 230K miles. The red one on the right (1998) was a $500 project car for my younger son. He ended up not being that interested in the manual transmission so we ended up with something else, though he did learn to drive on it. That's my daily driver. They are both DOHC 5 speed cars. 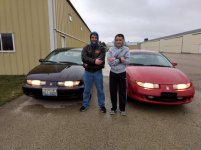 For my younger son we found this $200 2000 Buick Century. Needed some TLC as it had been parked inside for 5 years. All the brake and fuel lines were rotted and we had to replace the lower intake manifold gasket. Also the AC wasn't working and I fixed it. This had become the default family car as it is comfortable & fuel efficient. Once I get the MKT fully ready I suspect it will take second place. This picture was from a trip we took from Illinois to Florida to pick up a sailboat. 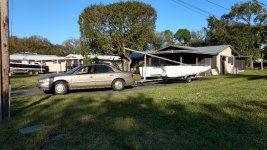