For more background on this mouse issue please refer to the following posting on the Blue Oval Forums:

On January 4, 2021 my wife and I factory ordered a 2021 Navigator. Using the “fordtracker.tech” Website it indicates our Navigators Production Date as February 20, 2021. Its my understanding today it only takes a day or two to build a vehicle on the assembly line. Our dealer received our Navigato...

As a summary, within weeks of taking delivery this spring of our 2021 Reserve L Navigator inside it developed what I would describe as a “wet towel” smell. Within in a day this odor turned into a nauseating smell of death. The source seemed to be coming from the ventilation system so my inclination was to pull the cabin air filter.

Oh my, has anyone ever tried access/change their cabin air filter in a Navigator? I can't imagine why, but it requires the removal of the glove box (6-screws) and two adjacent panels, one on each side of the glove box which don't seem to be designed for routine removal as they utilize these flimsy plastic posts/clips. Then, there is an additional black plastic panel directly behind the glove box which needs to be removed (really, why another panel?), again it utilizes hardware which seems flimsy for something that should be accessed every year or so, very disappointing for a $100,000+ vehicle.

Once I was able to pull the cabin air filter, sure enough, I found 5-dead baby mice. I thought, wow I'm sure glad I found them before they rotted anymore, and fortunately, the nest did not penetrate through the filter, it was on top (the inlet or up stream side). Directly below the filter is the blower fan.

I then began to wonder how could a mouse gain access to the cabin air filter. Clearly, this being a luxury vehicle, the “flagship” of the Lincoln brand, there must have been some consideration given to manage/control the intake air to the cabin which we are all breathing.

With the cabin filter removed, I then shined a flashlight above its location and I was able to prop it there. I then opened the hood of our Navigator only to be hit directly in the eye by the beam of the flashlight as I looked towards the firewall on the passenger side saying to myself that seems like a big hole/gap.

I'll admit the picture below is not the best but you get the idea of where the light coming through the firewall on passenger side, if you are a Navigator owner, open your hood and look in this location, you'll see the holes/gaps: 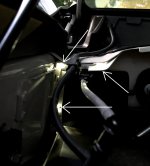 In doing some research I've found that a mouse can fit through a hole or a crack the size of a No. 2 pencil. The openings on our Navigator's firewall that the light is shining through are large enough for a mouse to fit through.

These same holes (the style of seams/flanges) are mirrored on the driver's side as well. Additionally, there is a fabric type of insulation on the firewall, filaments of this black colored insulation were also present in the nest indicating the mouse had access to the engine bay area and back to the cabin air filter to build its nest.

Again, being a $100,000+ vehicle this was very disappointing. Why were some precautions not designed and implemented for preventing this type of intrusion. I've heard of mice chewing wires in a engine bay, and can only envision how difficult to defend against that damage would be. But come on, this is the air we are all breathing! This air is being strictly controlled to be either heated or cooled, be recirculated or allowed to come from the outside. Is it too much to ask that some consideration be given to prevent a mouse from getting into the cabin air filter?

My first thought was to use silicone caulking to seal these holes but there is just no easy way to get a caulking gun into these areas, again during assembly this would have taken seconds to seal. I then decided to use butyl tape as its easy to mold into areas and stay's pretty sticky figuring if mice want to chew it they are going to get pretty gummed up.

Picture of butyl tape over holes on passenger side, these same holes exist on the driver's side: 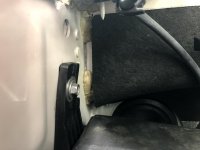 Unfortunately the death smell didn't go away even after I had removed the dead babies from the cabin air filter. The mother had apparently fell through the side of the filter as it is only ridged on two opposing sides. The adjacent sides of the filter are pretty flimsy and she must have slipped by on one of those. The Navigator's air filter is not ridged on all sides like your typical home forced air furnace filter. Once the mother fell into the blower area she could not get back above the filter to her babies and proceeded to chew through the venting below the fan gaining access to the inside of the Navigator.

Picture of chewed plastic interior intake for re-circulation of air to blower: 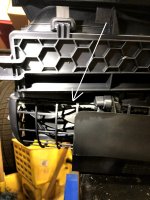 From the inside of the Navigator she was able to crawl back through a duct somehow getting herself on the downstream side of the heater core and became stuck in the driver's blend damper where she died. 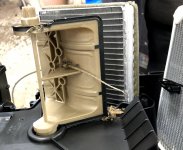 In the end the dealership had to remove the entire dash assembly, both front seats, center console and the front carpeting to find the source of the smell. 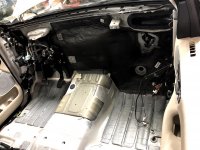 This when they were finally able to find the remaining pieces of the mother mouse. The dealership replaced all the ventilation duct work, blower fan, blend dampers, heater core, evaporator core etc.

In summary, if I was a Navigator owner I would take some time/effort to seal the openings in the firewall that I have shown to prevent the nightmare we have experienced.

We lost the use of our vehicle for 3 months; got the senseless run around from the Lincoln Concierge as they only provided another layer of frustration with this incident and incurred a claim against our automobile insurance.

Wow! That is awful. Does your vehicle sit unused for a while? Do you have a garage? This just seems rather odd for a vehicle that is used on the daily.

The Navigator was driven quite frequently, every few days while in our possession. However, since it was built on 2/20/21 and sat somewhere from then until it was delivered to our dealer on 5/19/21 it is our suspicion the mice got it during this timeframe. We have other vehicles which have been at this residence for 10+ years without a mouse problem, some sit for a week or more without being driven.

Ultimately we will never know for sure where the vehicle was when the mouse entered it.

The purpose of this post was to inform other Navigator owners they have a potential design problem, one that allows direct access to their cabin air filter by a mouse.

Ya the drive to dealership was quite nauseating, I even had all the windows open and always thought I had a pretty strong stomach, she has now been nick named by all our friends and family as the "Stinkin Lincoln"