yes I am aware of the dreaded bushing of the TV cable, and mine is fine. It's still the original in good shape.

However, I had a shop do an oil and filter change for the gearbox as good measure after 32 years.

Now before I had that done, I was test-driving the car and noticed no slipping OD but I was not doing long Autobahn runs, as I had a stuck brake, boiling dot3 on the front right tire and no insurance.

Then on my long run back home I found that the OD kind of slips if I drive in OD and gently apply throttle.

If I do a sudden almost WOT but no kick down it does not slip.

If I go kickdown it shifts down and when it goes back up to OD at 70 to 80 there is no slipping. If I go faster, I tested up to 165kmh/103mph, no slipping regardless of throttle position.

Now I did read there is this toe-in torque boost thing that make it slip out of direct drive OD if you open the throttle gently while cruising. According to what I did understand the AOD then using the alternate power path trough the torque converter instead of the direct input shaft so you would have still the low rpms from 4th gear but higher due to the involved torque converter, but still not like 3rd gear kick down fuel consumption. Good for passing on interstate.

Would that explain my AOD behavior?

How are yours doing?

The 1988 FoMoCo AOD (first generation) is a good transmission. Unlike its newer cousins the AOD-E, 4R70W and newer, this is still an "old school" transmission without computer controls, though it will have some electric solenoids "here and there."

The behavior you described may in fact be normal. There is a point under mild acceleration where the car will want some torque multiplication (unlocking the converter) but not not a downshift. This is particularly true in overdrive at highway cruising speed.

However, I'm roughly 900-1100 miles away from you, and have never ridden in your car. You also had a very trying and expensive journey bringing your new (to you) car up to your temporary home in Canada, to instantly welcome your new son or daughter (congrats again) into the world. So, you will be hypersensitive to any mechanical imperfections with the car. I know I would be. Or, the locking clutch pack may be slipping when it shouldn't instead of unlocking when it should.

If the torque converter is starting to go, you will need to replace it, since the lockup clutch pack is not a field-replaceable assembly.

First, replace as many of the linkage bushings as you have access to, both for the shifter linkage and for the TV cable. These bushings are all as old as the car itself, and are likely not in the best of condition. Now would be a great time to install the metal bushing on the throttle end of the TV cable.

Third, if you are absolutely certain that the "other shop" changed the fluid correctly and replaced it with the correct new fluid, change it again. Be sure to use the correct fluid, and use the Motorcraft brand from the Ford dealer just to make sure. Also make sure the valve body bolts are at the correct torque. If the filter is replaceable, replace it. If it is a cleanable metal screen, clean it. Yes, you did read that correctly. Since the torque converter doesn't have a drain plug, a "single" fluid change only gets about half the fluid. Doing a second "single" change will still leave some "old" fluid in the mix, but it will be less than what it was.

Finally, with the misfiring issue described in one of your other posts solved, test drive the car. The power loss caused by the misfire can present itself as transmission problems even with a good transmission If there is actual slippage of the torque converter clutch pack, and not a "clean and smooth" unlocking and relocking under the described circumstances, you will need to replace the torque converter.

While I'm pretty sure you won't have this problem, the car is thirty-two years old and has sat marinading in its own juices for years. "Bad" things can happen to a car when you do this. Hopefully, you have already fixed those "bad" things.

Uh oh, lots of work ahead of me but thanks for the detailed description. I'll work it down.

While not a show-stopper if you can't, fitting a tachometer temporarily (if you can't read the engine rpms in real time via an obd2 wireless adapter to your smartphone) may make it easier for you to see the difference between a slip and a "designer-intended" release of the lock-up clutch pack.

Sorry is odb1 only talks in blinking codes. But I thought about getting a alternator wave based rpm indicator.

Short update, on Monday I will have the TV cable adjusted to specs.

It turned out the bushing on the throttle body is wasted now. I slowly really hate that shop in Atlantic City who told me everything is fine. This will bite them in their arse. They almost made me waste my tranny. They are so lucky I heard it revving. And did those 1000 miles in 3rd or above 80 miles in OD where the line pressure was high enough to keep the OD clutch engaged.

So we justput a bigger cable tie on the cable to tighten it and it's already better behaving. All ad a small one on top and I'll be where the line pressure should be.

And I need to get that bushing.

I'll report back. Thanks guys.

Is this the right one? 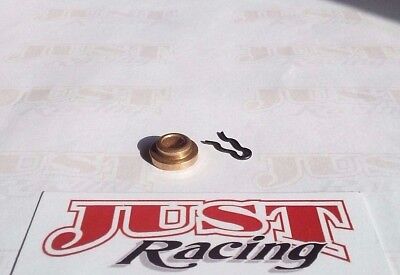 This should be the correct bushing, since it is for the TV cable to throttle linkage on a 1988 FoMoCo 302 V-8 to AOD transmission.

You will also need to periodically lubricate the bronze bushing on the TV Cable once installed. The "rubber" bushings are formulated to not need periodic lubrication, as well as to block vibration transfer from the power plant to the controls in the passenger compartment of the car. While the "infamous" TV Cable bushing sees enough stress to justify replacing the "original-type" bushing with a bronze one, the other ones don't see the same degree of stress, so the "rubber" ones are quite adequate for anything short of a "Cannonball Racer."