Any other smooth as silk riding vehicles you've been in besides the Lincoln Town Car ???

Any S-Class Mercedes. However, as far as ride quality, it's a big price gap. Which is why I've only owned Lincoln.

Ballyhoo said:
Any S-Class Mercedes. However, as far as ride quality, it's a big price gap. Which is why I've only owned Lincoln.
Click to expand...

I've ridden in an S class , 1989, I thought there was no comparison as far as ride quality went...just my opinion. I've not ridden in any S class newer, so I may be subjective and biased towards the Town Car also.

The W126 S class was built to the German standard of luxury of the time, which implied a certain amount of utility and a certain amount of performance in an overall conservative, austere and understated package. The w126, even that 89, would happily do things on the autobahn, or a dirt road, or the middle east in a sand storm, or the frozen parts of Europe, that an 89, 99, or 09 TC will not. That said, most any TC rides better. The W140 series that followed it bowed to the world market(meaning the USA and our car buying power) and went more toward comfort and performance depending on what model you opted for, some of them would give a good TC a run for it's money in ride quality while being quieter and handling, braking and accelerating better. They would/will also make you die poor. That was one of the cars that helped put the TC out of production. I don't have much experience with the later ones but I assume they followed that trend while losing reliability and cost effectiveness. Another area where the TC can't be beat.

GrumpyOleMan said:
As a previous owner of a MKS and a current owner of a '19 Navigator and '19 MKZ, I will say the TC is completely different. But the were engineered with different parameters and goals in mind.

The closest relatively contemporary comparison is my daughters few years old Buick sedan (cannot recall the model). Not to the standard of the TC but still a nice smooth ride.
Click to expand...

I had a 1963 Buick LeSabre 2 door that was a Fantastic Ride! It Loved the freeways! In 1984 I road tripped it from Milw WI to St.Louis MO to Atlantic City NJ with a detour to Joppatown MD, then back to Milw WI. No problems at all. If it wasn't for the moron who I T-boned and pushed into a parked car when he pulled out of an alley right in front of me, I would Still have it.

No.. Never ...Our 2003 TC is the best ever ride..Big heavy Air Ride with rack and pinion steering...as good as it gets for cozy comfort..

Iron Maiden said:
No.. Never ...Our 2003 TC is the best ever ride..Big heavy Air Ride with rack and pinion steering...as good as it gets for cozy comfort..
Click to expand...

I have to agree,my O2 is stellar in handling and comfort . 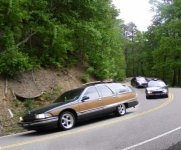 God that was a huge car...never been in one...but always loved Buicks....I'll take a Riviera please!

Norms1stTC said:
I'll be honest with you all, I've never had a vehicle that rides as nice as this 2002 TC Sig, it's overwhelmingly smooth, is there anything else like it out there ?


Let me rephrase the question in general.....

Is there any modern equivalent to the town car ride ?
Click to expand...

Any car that has air ride suspension has a better ride than cars without almost always. My 07 Designer, as others said, rides like a Lazy boy on a cloud. My aunt had a Mercedes from the late 90s that rode well but it wasn't a big car so it still wasn't a Lincoln ride quality. To be honest I think the best riding car I have ever been in is a tie between our panthers and a 1984 Citroën. Not sure the year. I was small and thought it was the coolest thing ever! So 35 years ago.
In 1955 it had a decades ahead of time hydropneumatic suspension system. If you had a flat you could adjust a lever in dash and the suspension would adjust and the car would run on 3 wheels. It's a amazing ingenious suspension system. Google it and read up on it. It's too much to put here. But that car would run over RR tracks and not feel it. It rode on a combo of air and oil. They kept same system pretty much since the 2cv. Ww2. Not many new systems of any kind make it that many decades without change. It was stopped in 2018. Idk what they using now. Ugly car, almost best ride!!

That Citroen system was licensed out to some other big names too for it's ride quality and adaptability.
Mercedes had some older cars with such as well.

wolf_walker said:
That Citroen system was licensed out to some other big names too for it's ride quality and adaptability.
Mercedes had some older cars with such as well.

Maybe that's what it was. This was 30 years ago or so. I just remember the ride was just perfect. Now it didn't corner at all but potholes and rough roads was smooth as silk!! Thank you I didn't know about this.
______________________________
Share:
Facebook Twitter Reddit Pinterest Tumblr WhatsApp Email Share Link